Today at eBookSoda, we’re privileged to be hosting an in-depth interview with chick lit author CeCe Osgood. Asking the questions is writer and book blogger Ali Crean, otherwise known as: The Word Slinger from All The Things Inbetween.

They’ll be discussing CeCe’s debut novel, The Divorced Not Dead Workshop, covering topics from friendships and love, to trust and commitment, as well as chatting about what it’s like to be an indie author. It’s a perceptive interview, showing that genre fiction, in particular romantic comedy/chick lit, can reveal character and substance . . . along with the fun and fluff.

CeCe has had a fascinating career so far: having produced a cult horror movie, worked as a script analyst for HBO, had two screenplays optioned, and has now finally realised her childhood dream of becoming an author.

Her debut novel The Divorced Not Dead Workshop is a romantic comedy with a whopping side dish of sassy chick lit! 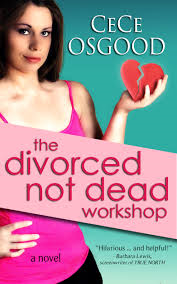 Divorced five years and recently dumped by her Brit boyfriend, Dorsey Bing, smart, funny and a wee bit angsty, brainstorms about a dating workshop for divorced people. Too bad she’s an idea person with zero follow-through.

Facing failure, humiliation and heartbreak, Dorsey must tackle her biggest challenge if she’s to win the love, and life, she’s always desired.

Ali: The Divorced Not Dead Workshop is a pretty cheeky read about the thirty-something relationship sinkhole that many of us women fall into. Dorsey is a very comical walking disaster, I couldn’t help but constantly be pinching my eyes shut to better imagine the visual of her antics. Was the first concept Dorsey the same thing that final edit Dorsey was? What was the evolution of her in your character process?

CeCe: Dorsey did evolve from the original concept. At first, she was a less introspective character and a non-stop klutz, however as her backstory surfaced she evolved into a more realistic person in my view. In my writing process, and I know this is true for many authors, I created a list of details about Dorsey—her physicality, her attitudes, her family history, her emotional range—but during the (many) drafts of the story, she became more individualized and distinctive.

In the beginning of the story I noticed that you really “California’ed” up the novel. It oozes Los Angeles character and I couldn’t help but feel like I had returned back there when you were talking about the parking lot that is the 405, Pei Wei, air kisses & false affection, mini mansions on Beverly Glen, and the general douche-baggery of LA people in their unashamed and blatant preference of what twinkles, shines and has bigger, firmer and more than likely terribly expensive implants. Was it simply writing what you knew or was it that you really wanted to comment about the superficiality of Los Angeles and how it played into Dorsey’s state of mind?

Dorsey is at a crossroads at the beginning of the book. The fifth anniversary of her divorce is preying on her mind, as well as being dumped by Theo. She’s trying to figure how to make things change, and the idea for a dating workshop for divorced men surfaces, however she has zero follow-through on her ideas. Pilar is the one who forces Dorsey to act, at least it seems that way. To me, Dorsey is actually at a turning point in her life, one that’s been coming for a while

Dorsey is on the negative scale of self-esteem and her self-talk is horrendous and her pessimism is through the roof. Not many people would understand the conflict of a character like hers being so distrusting of other’s motivations and intentions while also relying so heavily on them to save her and like her at the same time. Were you ever worried that you would make Dorsey unlikeable in her emotional complexity?

In an early draft, I decided Dorsey was too whiny and had her show in later drafts a wider range of emotion, using anger, resentment, and sadness to offset her self-doubts. I wanted her to be real, not a kick-ass heroine, which seems more of fantasy than a reality to me. I can understand that women, particularly younger ones, who haven’t gone through divorce or other kinds of loss may still have a lot of kick-ass in them, but Dorsey has had several losses in her life over the past five years, so she’s proceeding with caution.

It’s often stated that in friendships three is the perfect number for a pack of females. In view of Dorsey’s insecurities did you ever consider when making this trifecta that there would be an imbalance in her mind that should have also been woven through the story about conflict of sides within that friendship. The world was against Dorsey and everyone was always undermining her and sometimes you really can’t trust the ones you love after all. Did that aspect ever strike you?

No, frankly, that didn’t strike me. This story wasn’t focused on the female friendships, which I feel would have placed it more directly in the genre of women’s fiction. Its focus is on divorce and dating after divorce, so I chose to make the M/F relationship more complicated and filled with trust issues.

This entire novel is all about risk. The risk of taking an idea and actualizing it. Taking the risk to truly commit in a relationship and invest in it. Taking the risk to fully trust someone and surrender to the fact that they might hurt or disappoint you and it won’t be the end of the world. Taking the risk to be something and risk the chance to fail at it. When you were coming up with the concept for the book was the theme of risk so heavily weighing in your mind and why didn’t you make Dorsey focus more on the topic of risk in the workshop?

“Taking the risk to truly commit in a relationship and invest in it” is a central theme in the novel. At the deepest level, that’s what the workshop is about. It’s also how I feel about marriage. My own experience with divorce showed me that I did not fully commit to the relationship or to making the marriage work. Like Dorsey, I was too young and not ready for marriage, but wasn’t aware of this. I learned though. Sadly, it took many years because I didn’t go to a “Divorced Not Dead Workshop.” (sigh)

Another theme concerns why people don’t act on their ideas. Dorsey has a great idea but doesn’t put it into action. This is a behavior pattern for her. She fears failure, which many women undergo after a divorce. And taking the risk to start again? Well, that’s just about every Woody Allen movie ever made.

One of the things I noted the workshop never touched upon was the value of not every relationship ending in romance or something serious. It’s extremely unhealthy to be in that constant black and white thinking of men/women are bad or I can’t live without this being ‘my everything’. Entering into intense relationship after intense relationship only fortifies that sense of insecurity of not being worthy of one. Dorsey never really learns the value or importance of male friendship over a romantic or sexual relationship. Had you ever considered having an alternate ending with a more ambiguous ending? Maybe something where she realizes that she just needs to be whole before she become to halves of a whole?

If the story had been more of a literary fiction, I might have chosen that direction. Since, however, I thought of it in terms of a romantic comedy/chick lit/lighthearted women’s fiction I wanted the romance to play out. Plus, it shows Dorsey coming to understand her own mind and behavior patterns. She has to become proactive (to act on her idea rather than bail like in the past). She has to confront Theo. She has to face her biggest challenge — and fight to get what she wants; for “the serious” relationship.

The Divorced Not Dead Crew becomes a rather close group of friends. Of those in the workshop who was it that you found the most fun to write and who gave you the most trouble to visualize? Did any of the characters surprise you in their self-discovery?

I enjoyed the sisters and their rivalry quite a lot. And Stewie, who appears to be a jerk. He did surprise me in how he behaves as the story unfolds.

I also enjoyed creating Chester and seeing him grow from a timid fellow to someone who realized his own value.

If you were to review your own book what would you have to say about it? Tell me what you feel are the strong parts and the weak parts about your novel and in hindsight is there anything that you might have changed.

I was worried about the workshop chapters. Originally they were longer but I cut out a portion because I thought it dragged, and I also felt that I needed to get more plot events going on to satisfy the genre aspect of the story. I wanted the book to show how we can become aware of our thought patterns and yet fall right back into them, which is what happens with Dorsey.

I guess my review would reflect on this and point out that this romantic comedy cloaks a fairly serious approach to human psychology.

I wanted to show that, despite what she’s “learned” in the workshop and the events of the story, she falls back into that thinking almost by default in the last confrontation with Finn. I guess Tolstoy said it more succinctly: “True life is lived when tiny changes occur.”

As a self-publishing author how do you feel about book pirating? Do you think that indie authors are more strongly impacted by illegal book downloading than publishing companies? Would you be willing to make your books free and request donations if you found that was a better earning model as a self-publisher?

I’m not sure how the requesting donations would work. I think the music industry has done something like this, but I’m unaware of the result.

I hate pirating, not only because it is theft, but also because it devalues the intense amount of work an author puts into a book. Like Nathaniel Hawthorne said; “Easy reading is damn hard writing.”

And, really, doesn’t everyone wants to paid for working? No matter what you do or where you do it.

What does being an indie author mean to you? What would you wish to change about it?

I enjoy writing under my own rules, which doesn’t mean NOT proofing or editing the work. That’s a given.

I wish I knew of a better way to become visible to the reading public. It takes a lot of time and energy to get reviews, to get your title out there, and to find promotional activities.

Are there opportunities that you would like to find out about or network with that you don’t have available to you currently that would help you become a more accomplished writer, increase your fanbase or help establish your work publicly that you would be interested in having someone contact you about?

Reviews are a strongly needed component in the self-publishing world. It’s getting very difficult to secure effective promo without a certain number of reviews and the number keeps ratcheting up.

Also I would like to know if there are more print-on-demand companies springing up and a list of editors, proof-readers and web designers would also be useful.

Anyone who can help CeCe out with her list of requirements, feel free to leave details in our comments section. And if you’d like to connect with CeCe online, here’s where you can find her: